This is officially my April post. Yes, I know it is May. Yes, I need to work on my punctuality. At least I shot all of these in April. Anyway, to  the post.

Last fall, I planted tulips. This is always done with hope of spring in mind. There is joy and anticipation as the green shoots make their way out of the damp spring earth. And then, in this instance, there was hail. Hail that shredded the tulip’s leaves. One was trampled just after a blossom emerged. My garbage can landed on a row of them. Nevertheless, the tulips bloomed. Closed at first and still mostly closed when it’s not sunny, they provided a nice burst of color, even if they were a little bedraggled. 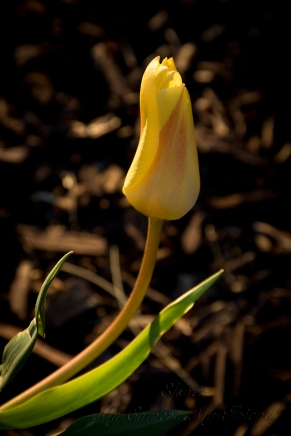 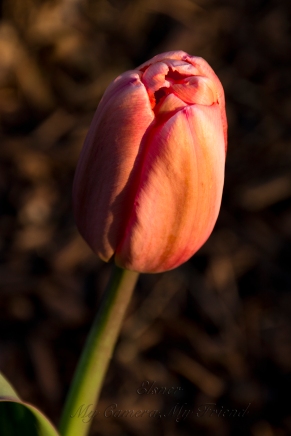 Then one morning, they were all open and the sun shone on them beautifully. I had to go out and photograph them, even if the finished product wasn’t as good as I had hoped. The changing hues throughout the petals were lovely, and I had to at least try and capture them.

Since these photos, the tulips have continued to change. Some are nearing the end of their blooming season and look like it. The yellow ones have turned more orange. A few have yet to bloom. It looks like they will be purple or white. I look forward to the continuing surprises they will bring.

In a way, humans are like the tulips. We continue to grow and change, but we do so at different times. Some are hit harder by the hail or garbage cans of life than others. Maybe this isn’t the year some of them will display their full glory. Maybe that will come next year. Right now, we are all trying to make it through the hailstorms of this year. May we bloom and change into increasing beauty on the other side of the storm.

I went to a small town car show on the 4th, and yes, I’ve had trouble finding time to edit and blog this month. I did mostly some contrast and color adjustments with a little glare and dust spot removal. However, I did decided to split tone the Nova so it would be more blue and less whatever was reflected in it. 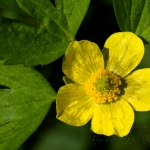 A few weeks ago, the weather was nice, and I got out to photograph some flowers. It was late in the woodland spring wildflower season, so swamp buttercups and violets were about all that was left. I decided to shoot with the macro lens. The flowers are small, and practice with manual focus is good for me.

I spotted this large, fuzzy bee. It’s so fluffy looking I almost wanted to touch it, but it’s a bee, so photographing it will have to do. 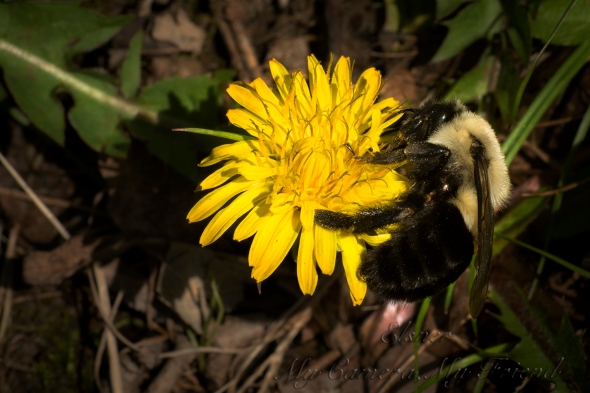 Later that day, I visited a city park and photographed this flowering viburnum. I liked the bright pink buds on this particular variety.

Spring is playing hide and seek with us. One day, it looks like Spring is finally here! . . . then we get four inches of snow again. Unfortunately, that means no nature photos yet. So I turned to one of my favorite indoor subjects – mugs. This little mug/teacup/coffee cup is one I’ve had for a long time. Since it is rather old, I decided to go with a vintage theme and photograph it on a table from the 1970s with the matching china cabinet behind. 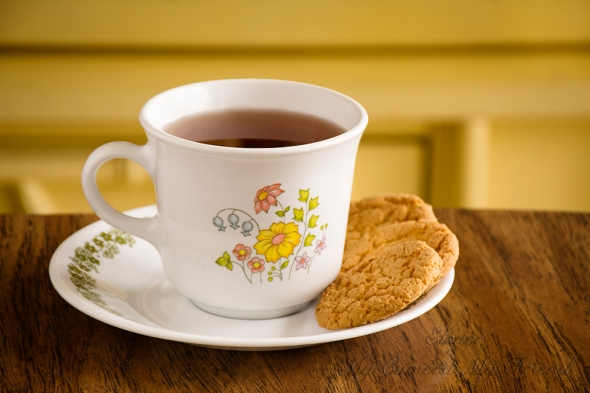 I also shot it with a tea canister that includes many of the same colors. However, I think I like the photo of the teacup by itself better.

Next Time: More Mugs or Finally The Great Outdoors

Happy Labor Day, otherwise known as the cultural end of Summer in the northern United States. Here are a few photos of Summer wildflowers I shot a few weeks ago. Before you know it, I’ll be posting fall scenery.

Next Time: Either portrait, otherworldly, or abstract. I haven’t made up my mind yet. 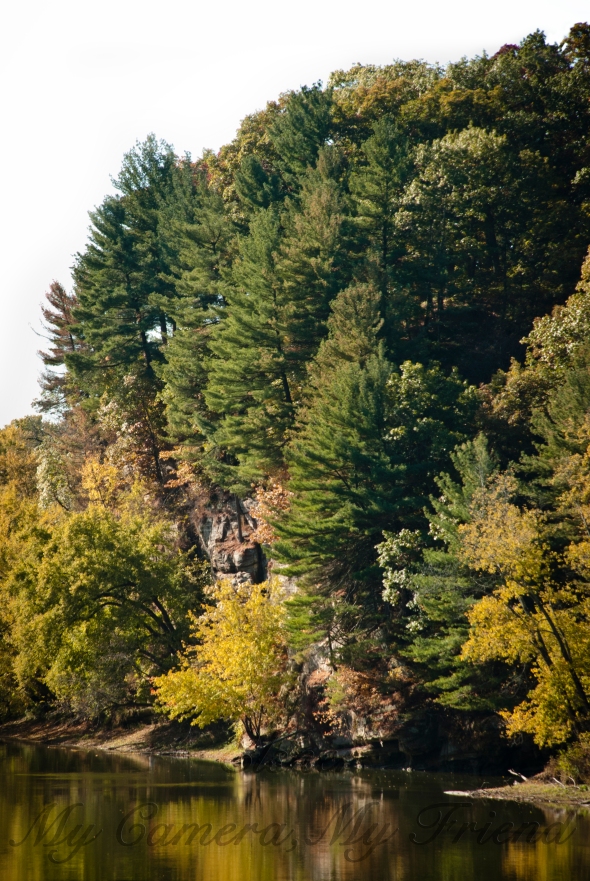 I’ve been threatening to do these liquid experiments for weeks, so I thought it best to get it out of my system. If you follow me on Twitter, you know I did some test shoots and took a lot of pictures. This kind of work is like photographing fireworks without a script of the show. It takes a lot of trial and error and you never know exactly what’s going to happen. My first shots were of the food coloring shortly after it entered into the water. The drop would spread out like a chandelier as it sank towards the bottom. Then, I’d add another drop.

I tried letting it sit for a while to blend a bit and adding a drop or two of another color. The green looks like a flower.

As you can probably see, it’s not exactly sharp. Food coloring blends with the water and lacks distinct edges. I focused as much as I could, but eventually I had to think of a way to use this to my advantage. Patiently waiting to see what the food coloring did when allowed to sit in a still glass of water produced some interesting results. It fanned out into long, swirling trails. I even had some luck mixing two shades of purple. The indistinct edges could work well for backgrounds. 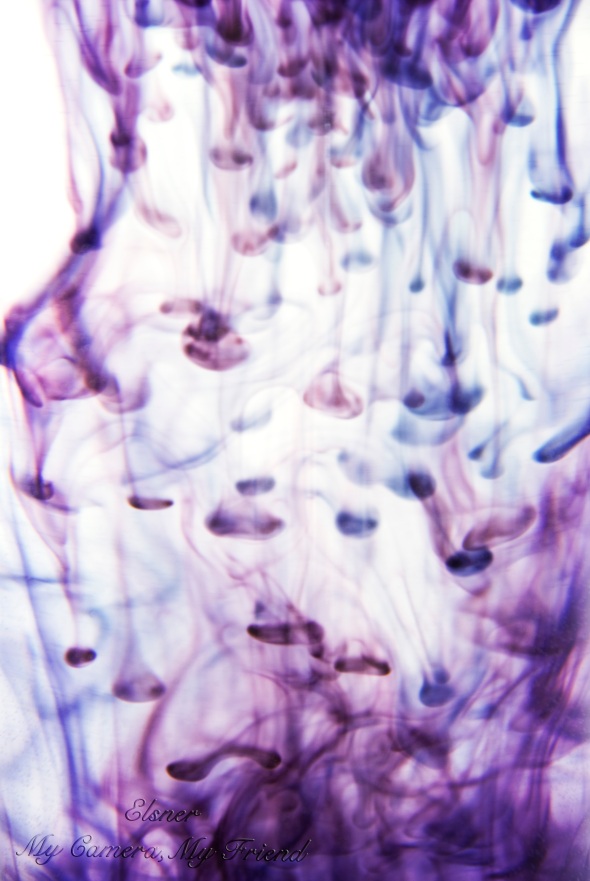 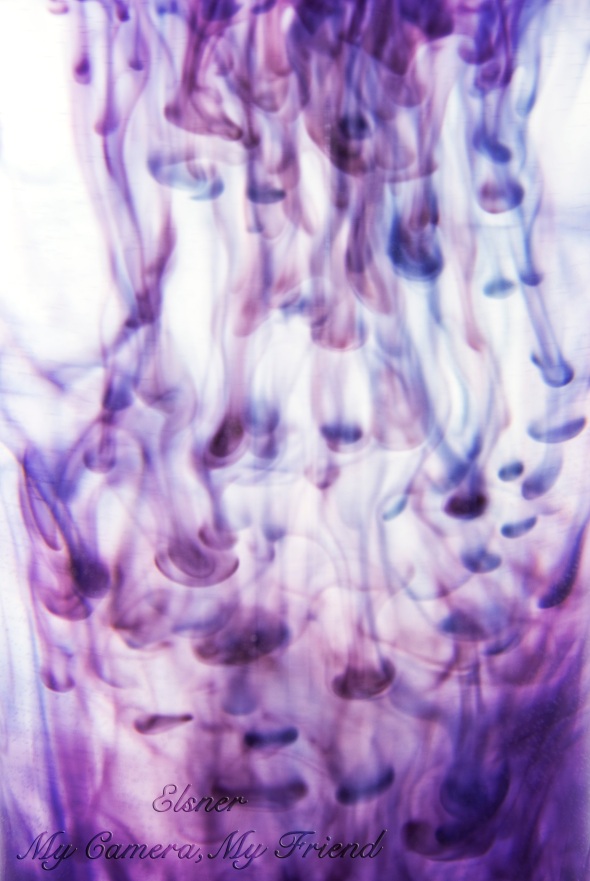 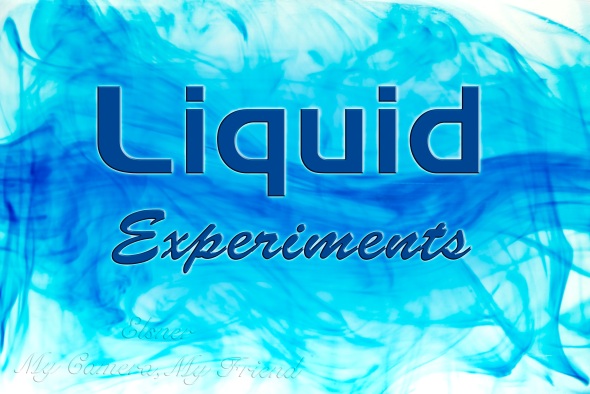 Using one of my shots as a background.

I continued my experiments varying color combination and water motion. At first, I filled the glass from the faucet and let it sit awhile before adding dye. Later, I discovered stirring the water gave an interesting effect. 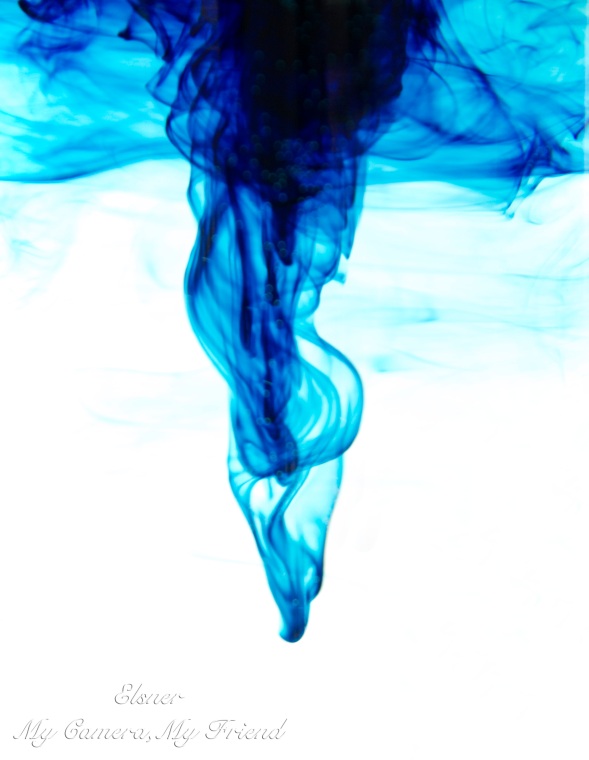 Adding dye to a freshly filled glass of water was another variation. As you can see, I flipped the shot above and the shot below for artistic effect.

I know this is unorthodox photography, but it provided me with some images I can use for backgrounds and other elements in Photoshop work. Not to mention being a fun experiment and keeping myself and one of my cats very amused.

Next Week: Box and Folding Cameras

I’m going back to something more traditional next week: old cameras. This time, very old cameras, say 70 or more years old for some. Hopefully I can find the old Kodak folding camera.