I was looking for a 35mm camera from the 40s or 50s for my collection when I found this one at an estate sale. A little worn and dusty, but he’s cute. This is an Argus C3 made in Michigan either before or after WWII. Eventually, I’d like to do more research on this camera, but for now I’ve just cleaned and photographed it. Poor thing was pretty dirty. I did quite a bit of Photoshop work on the camera because of the dust even though I cleaned it a lot before shooting. For more information about Argus cameras, visit http://argusinfo.net

Maybe you can tell, I’m pretty rusty with the still life/table top right now. Due to other commitments, I shot very little last fall and winter. Right now, I think maybe getting back to more of the basics would be good, so I might do some objects on white. Otherwise, we’ll see what Spring brings.

A Companion in Adventure

I said I was going to photograph the lovely old Polaroid folding camera. Despite my best intentions and the best intentions of my father, neither of us could find it. However, I did find the ancient Kodak Medalist II. Although it’s not as old as some of the other cameras in my father’s collection, it is by far the most worn and well-traveled of them all. My father acquired it while cleaning out a photofinishing plant in Wisconsin after the place went out of business. The Medalist’s owner had died by then. Reportedly, he was world traveler, and this camera was his companion on many adventures.

The Medalist II was manufactured in the late 1940s. It was a fine camera in its time with rangefinder and other focusing helps. Like many items from that era, it was built like a tank. This top view shows just how wide it is.

The focusing mechanism is also quite rigid and sturdy. In the camera’s present state of disrepair, it is difficult to turn. 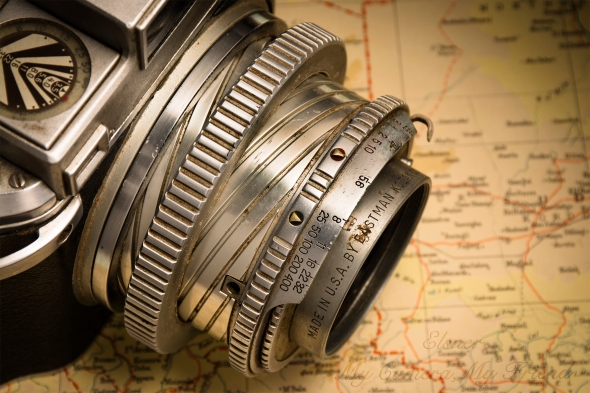 You’ve probably noticed I’ve made no attempts to clean or retouch this relic. My father decided years ago that it should stay as he found it: someone’s old companion in adventure bearing the marks and dirt of its life and adventures. Although the former owner had it repaired on several occasions, it would take a lot to get this one back in shooting order even if we were to try. I’d estimate the last repair was about a decade before my father acquired the camera.

This Medalist II belongs to the past. However, they are such fine cameras that some people are still fixing them up and shooting with them. Here’s one man’s story of getting his Medalist II in working order: http://blog.timesunion.com/chuckmiller/welcoming-the-kodak-medalist-ii/21899/

It’s hard to believe the 4th of July is gone already. I shot the fireworks lat night, but I promised a camera post this week, and I didn’t have much time to edit today.

My parents brought this old 8mm home movie camera to me after visiting relatives. I assume it spent years tucked away in my grandmother’s house, like many common old objects in my father’s family. The 8mm used to be the way to capture fleeting moments of family history like vacations, trips to the beach, or Christmas morning. A bit before my time, to say the least. 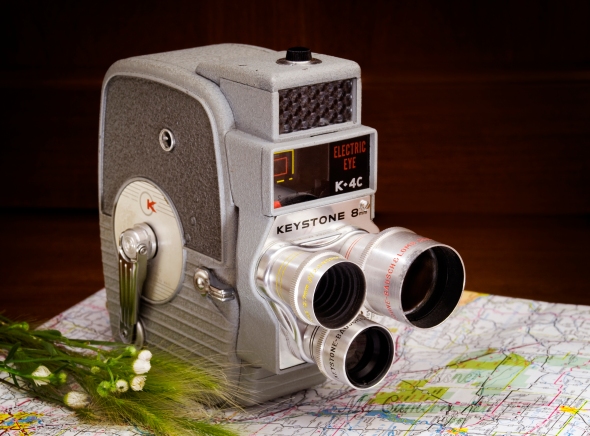 This worn yet charming example features an electric eye (a sort of exposure meter) and a rotating turret with three different lens.

Here, you can see the camera’s power source: the hand crank. Wind it up, then press the lever. Kind of like a windup toy. 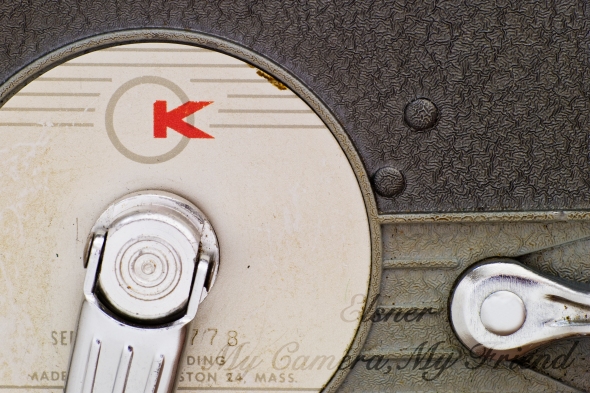 *Edit: I recently found out this camera came from a church rummage sale, so I can stop wondering if there are any old home movies out there.

Next Time: Old Cars or Nature