I know I haven’t posted in a while. There’s been a lot to keep me busy lately, so I focused on making sure the photos exist. Seasons are fleeting. I can always edit and post later.

Dad and I journeyed to Governor Dodge State Park in Wisconsin. It was the first time we’d hiked a state park in Wisconsin. They’re a little different than what we’re used to, and our map reading and navigational skills were rusty. We got lost. Eventually, we found the waterfall. It’s an odd one: one big rock with a stream trickling over it.

We hung around the “canyon” for a bit.

When we were done at the waterfall, we headed out the scenic route. Not only was it prettier, but it didn’t involve a tall, slippery stone, uh, “staircase”. Dad was happy about both of those qualifications.

We decided the “scenic route” to the waterfall is the most photogenic part of the park, and we should return in the future. Hopefully, we won’t get lost next time.

Last year, winter was mild in my area. This year, it is back to normal. So in honor of an actual winter, I’m taking some time off The Big Project to bring you snow photos.

First, I went to the local forest preserve, a well-known area I can safely navigate in the snow.

Water had oozed out of the limestone bluffs and formed murky icicles.

The creek was mostly frozen, with small areas of running water breaking up the ice.

Back home, I went to check out the spruce. It always has interesting ice and snow deposits. 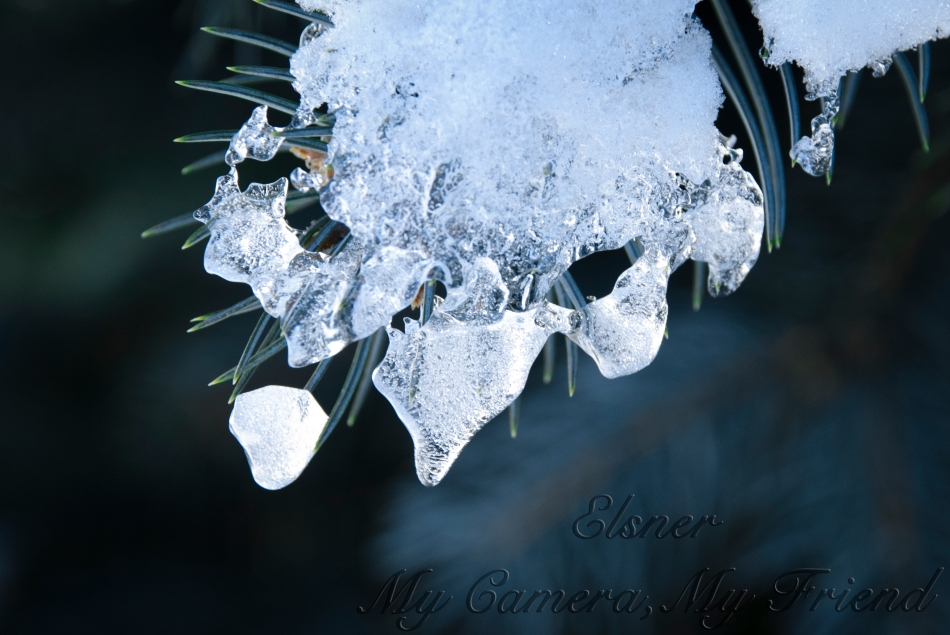 Winter. It can be annoying, but it can also be beautiful. Live with the bad, love the good.

Well, this isn’t Christmas decorations, but it’s not archive. I went on a spur of the moment photo hike today, and I thought it would be better to do the Christmas decorations next week and show you some of the ice and frost we’ve been having in my area this week. We’ve not had any real snow yet, and the frost melts off by midday. However, it’s enough whet my appetite for the visual landscape to come.

Here, the ice along the creek complements the leaf trapped in it. 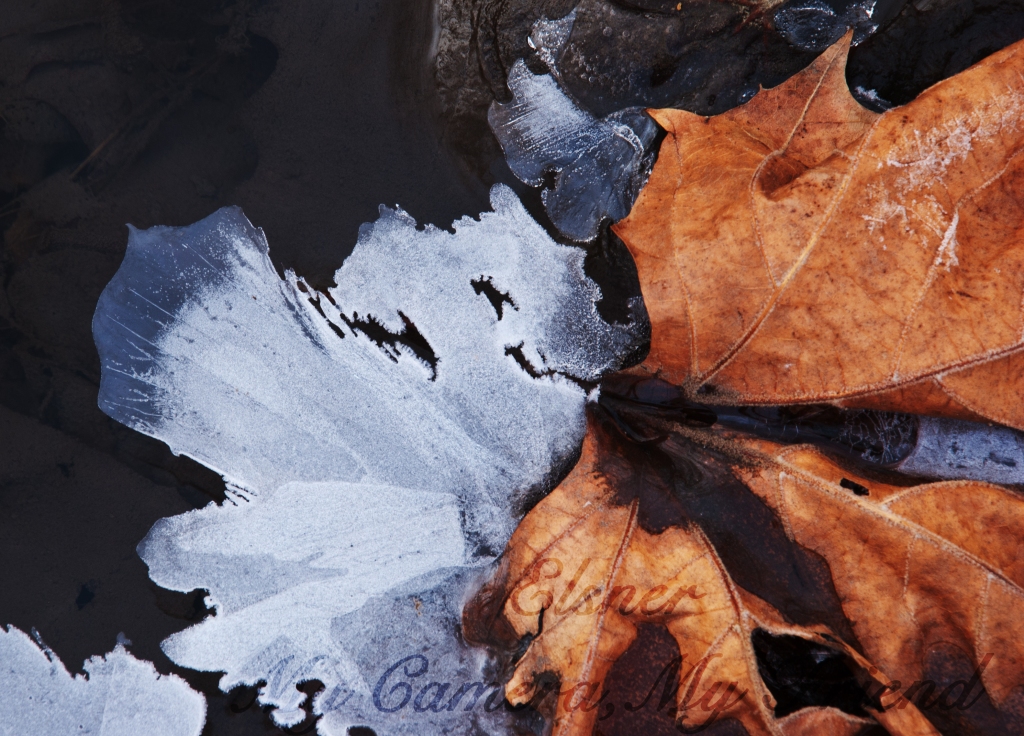 The ice forms various patterns in different locations along the creek.

This leaf is covered in frost. It looks practically sugar-coated.

I know I can find some archive at the very least. I will most likely finish what I started this week, or perhaps add some more.

After months of waiting in the snow, Spring is finally coming over us. Though the leaves are not yet on the trees, I started to think about going for a long walk with my camera. Seriously thinking about it that is, it’s been in my mind all winter. Just yesterday, I mentioned my thoughts to my father, who as fate would have it, also wanted to go out. I loaded up my DSLR and tripod, and he loaded up his 4″X5″ and tripod. There we were, hauling our gear around a forest preserve practicing two very different styles of photography. I shot what interested me while he patiently hiked around the park looking for one thing to shoot that day (he only had two sheets of film left.) It was a great day to be out. The small stream in the forest was thawed and running with melt off.

Throughout the forest, we saw evidence of tree trimming along the path and what looked like some sort of controlled burn. Must be maintenance time for the trails. 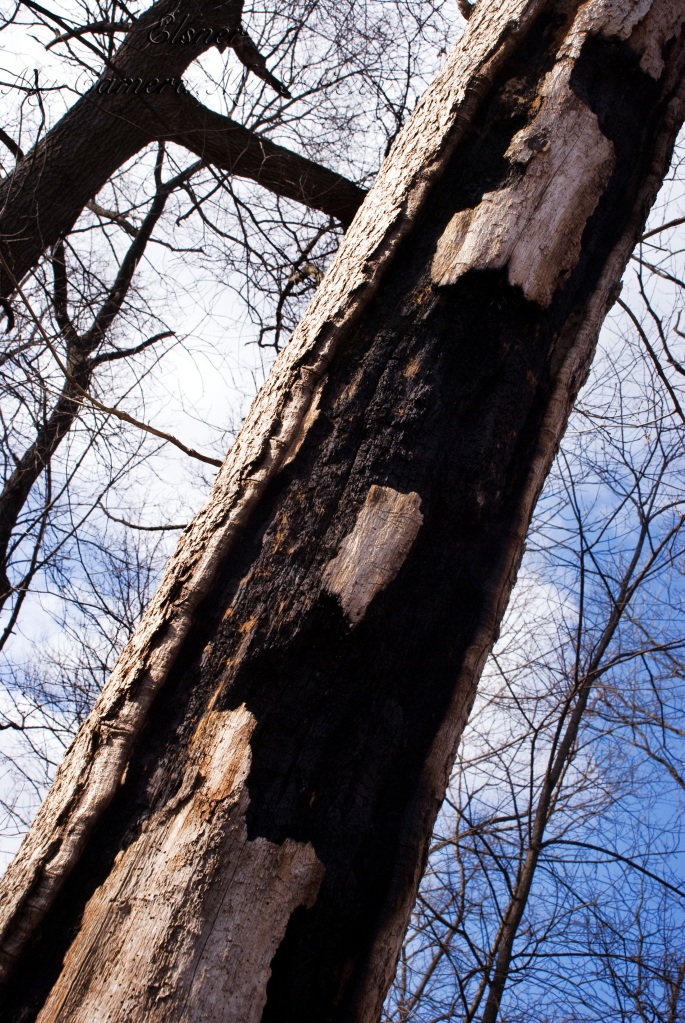 Eventually, we ended up back where we started. I was drawn to an old dead tree covered in lichen. It had a combination of shape and texture I had to check out.

Dad was drawn to a still-standing old oak tree he’d spotted when we first arrived. Eventually, I came over to see what was going on in his photographic genius mind and practice being an assistant. Watching him, I couldn’t help but think I should revisit his kind of photography. The discipline and precision of old-fashioned 4″x5″ view camera photography mandates careful thought, an exercise I could use to keep me from getting lazy. I’d have to scan it for the blog, but it may be worth it.

Due to my unusual schedule this week, I’m going to do a part two of sorts for next week. While out in the woods, I found some logs that looked like unfriendly animals. Since the log monsters wouldn’t really go with the tone of this post, I decided to save them for next week. I know, I was just talking about being lazy, but trust me, there are extenuating circumstances.