Back when I went to go see the steam engine, I found some of buildings in the area interesting. After the train left, I took a couple of photos. Since they didn’t fit with the train post, I saved them for a week when I was in the middle of a non-photo project and didn’t get around to shooting anything. Well, that’s been the last three weeks. I really did want to post them though. I love the stained glass awning. 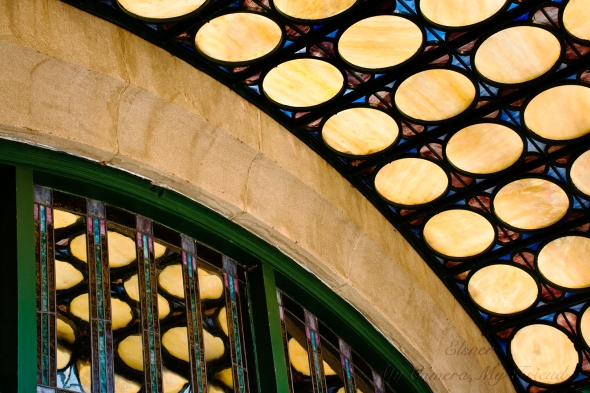 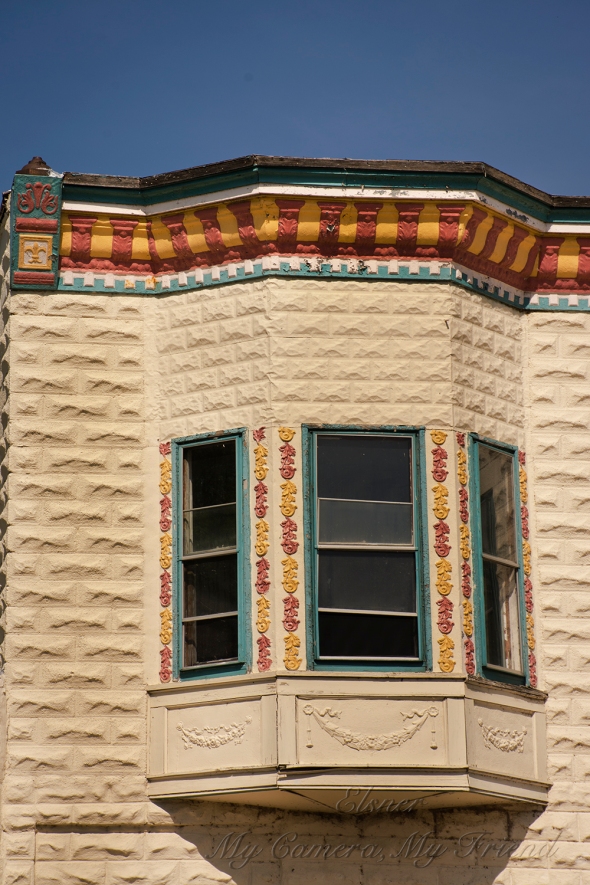 When I was in my early teens, an organization in a city near me finished an ambitious project: they restored an old theater. To celebrate, they held an open house and many people from the surrounding area came to tour the newly restored theater. My parents took my sister and I to go see it. I remember my fascination at the ornate detail of the theater.

After college, I became interested in abandon places. Not that I would visit one alone, but I loved looking at photos of once-grand buildings as nature and the environment reclaimed them. However, the photos of abandoned libraries and theaters always made me a little sad. Maybe it’s the decline of civilization, or maybe it’s because I’ve seen an old library and an old theater in preserved or restored condition. I often thought it was a shame more couldn’t be saved.

Several months ago, my father informed me that the local photo club had arranged to visit the theater we had toured all those years ago and visited a few times since. The club had purchased a tour and several hours of time to wander the building with cameras. I had the opportunity to photograph the very same ornate building that had fascinated me years before – and it is still in restored condition.

Since I ran out of retouch time (dynamic range is a big concern in this building!), here are the photos from the entryway and upper mezzanine: 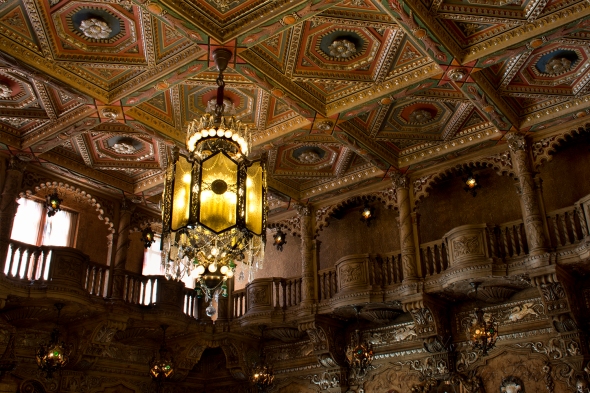 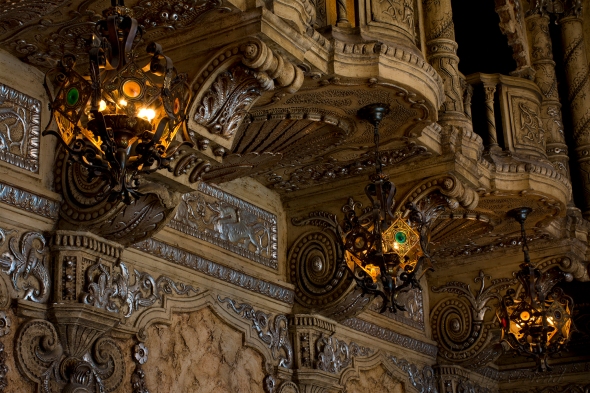 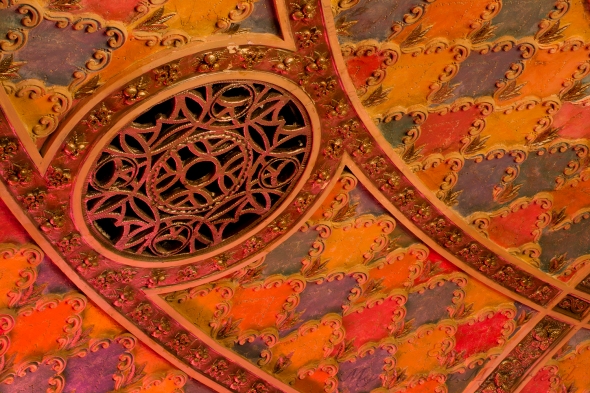 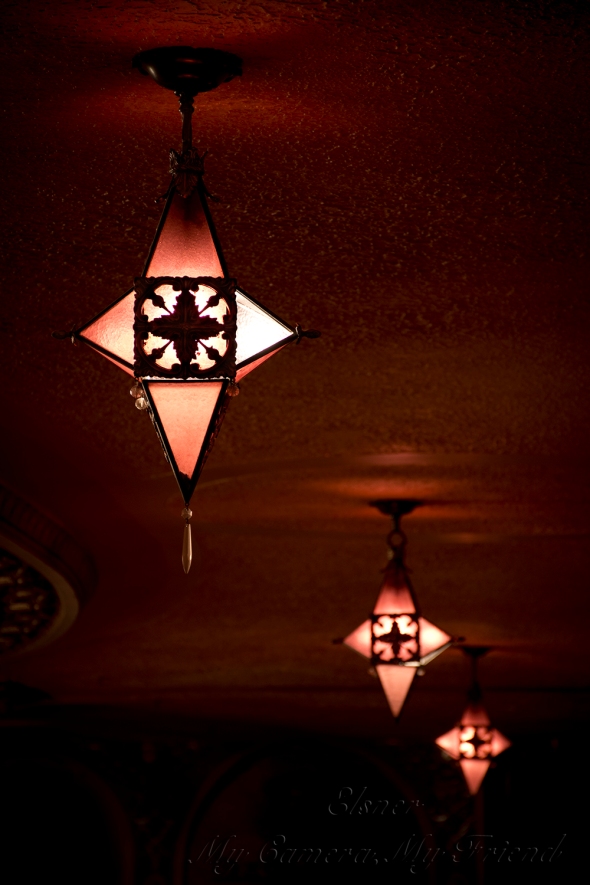 Next time, I will continue with the inside of the theater. In a world with so much entropy and decay, it’s always a ray of hope that some things can be saved.

Several weeks ago, I went out for my last Fall shoot of the year. There wasn’t much left, but the colors were vibrant. 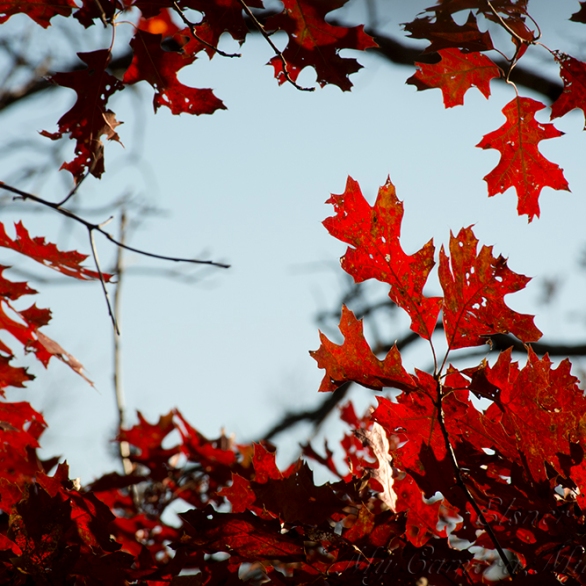 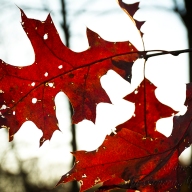 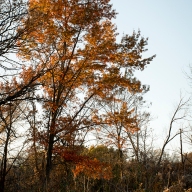 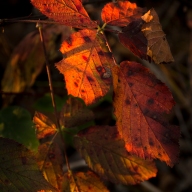 I just barely squished a trip to the fireworks into my 4th of July weekend. Since it was quite possible that my schedule for the next month or more would be tighter than usual, I decided to wait and post them as a regular post rather than a special 4th of July edition that weekend.

When it comes to photographing fireworks, just like many things in life, there is more than one school of thought. The way I originally learned involves very long shutter speeds where the light is entirely in trails. This allows me to have all the colors produced and include several bursts in one shot at the small town show I attend. The other method is to use a much shorter shutter speed and capture a lot of the sparkle we know fireworks for. This makes timing trickier. It also makes it more difficult to get multiple blasts in frame at smaller shows that are more likely to send one up at a time. Personally, I also tend to capture more smoke when I have shorter shots with a higher ISO. But sparkle is part of the fireworks, so this year, I experimented with getting a few of the blasts cut short a bit so I’d have some more.

Next Time: Change and Archive

Well, it’s happening. I’m going to be rather occupied with other matters for the next month. A necessary pain to accomplish a much desired end. I will probably post some archive material that I’ve shot in the past few years and never posted. Who knows, I may even go back to college stuff. Anyway, squirrels will most likely figure in the mix somewhere. Maybe I’ll post my college photo contest finalist shot too.

What do You See in Fireworks?

Last week, most Americans spent the evening watching fireworks in one way or another. Most marvel at the colorful bursts that appear and vanish before our eyes. Some of us have a different perspective. Why? We photograph fireworks and therefore become concerned with how the camera records what is constantly blooming and fading before us. When we press the shutter release, we never quite know what we’re going to get.

When I go to a fireworks show, set up my camera on a tripod and wait for the first blasts. After that, I typically pick my final location. Sure I guess when I first arrive, but there’s no way to tell for certain where I need to be untill I see some action. After the adjustments I begin to think about what I’m shooting. Do I want the trails from the launch in this? Maybe I should try to press the button a bit later and get less trail? How much should I let the fireworks drift away? Would a sharper approach give more sparkle? How many blast should I hold the button down for?

It’s hard to guess what to do. Experience helps, but chance is still a major factor in getting a good shot instead of this tropical paradise of chaos, or something worse. 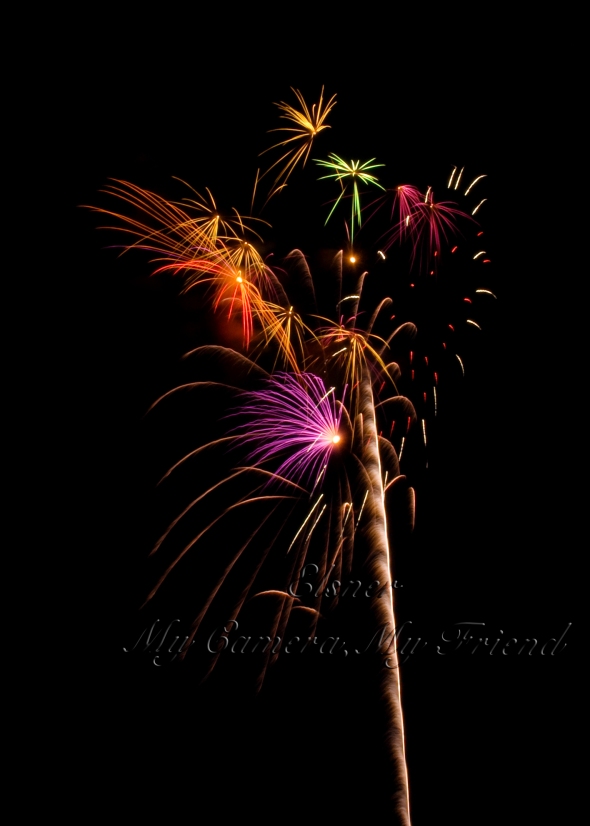 For this one, I’m thinking Mexican fiesta for some odd reason. 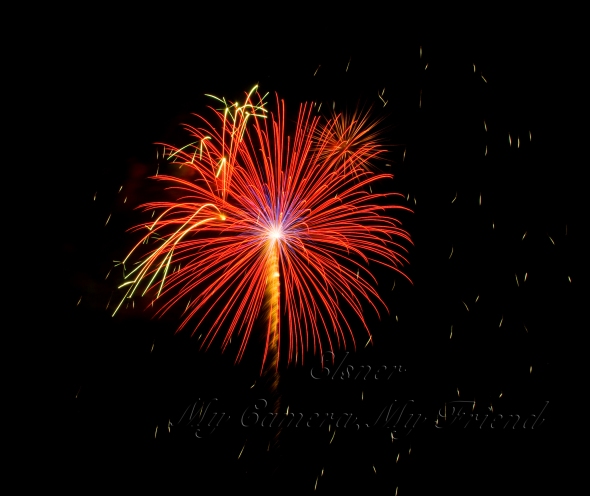 Pressing the shutter release just as the fireworks are launched can record a long trail and may result in a flower-like effect. 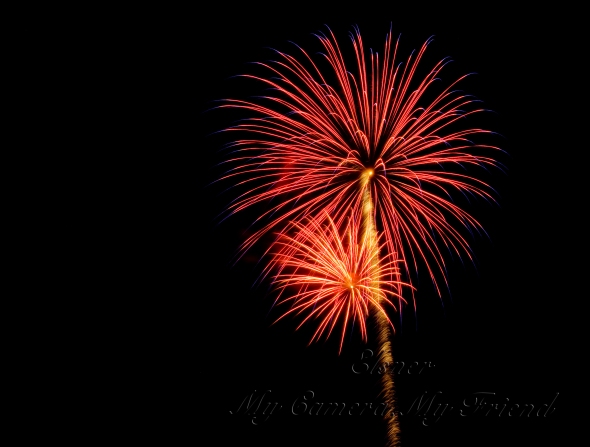 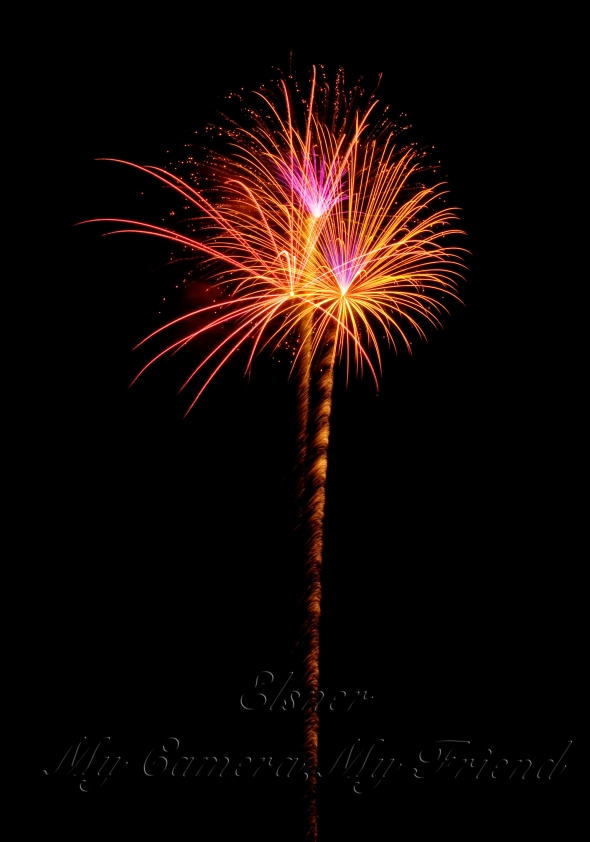 This combination looks like some weird amoeboid life form or jellyfish. 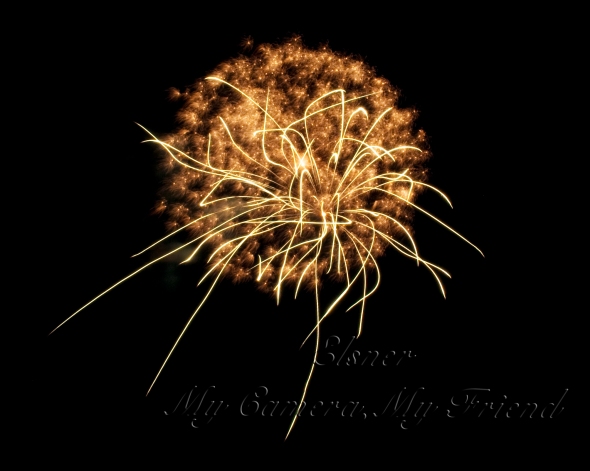 Ones that come up from the ground in continual streams offer some more predictable possibilities. 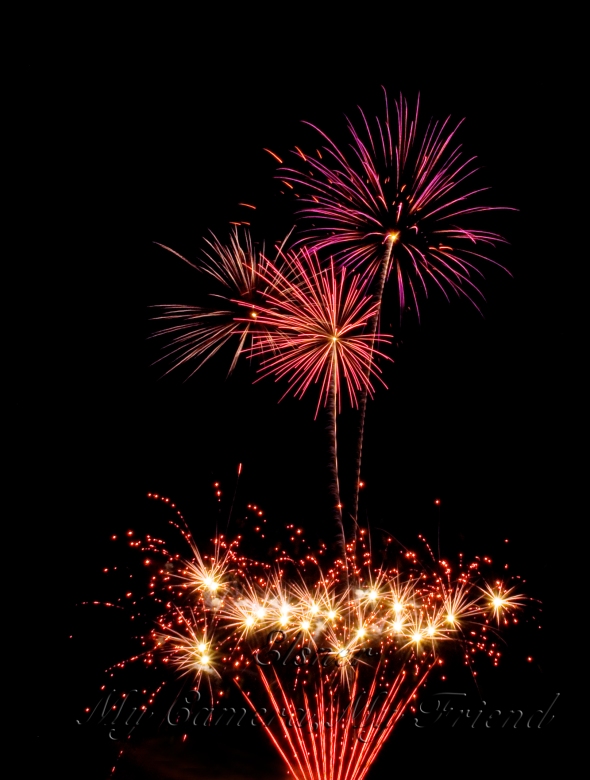 Sometimes, I can get a nice patriotic grouping. 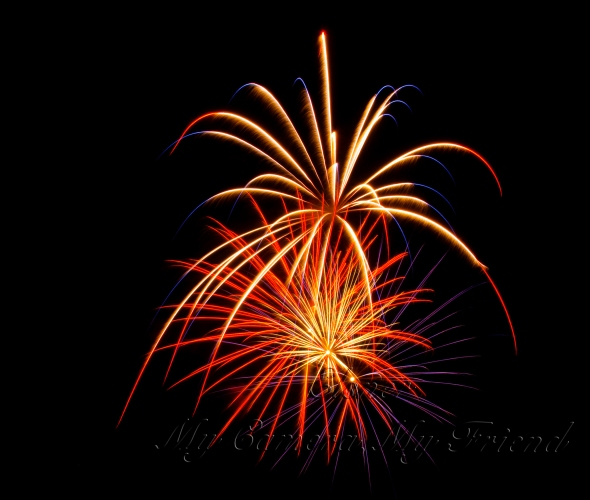 Others just come out pretty. 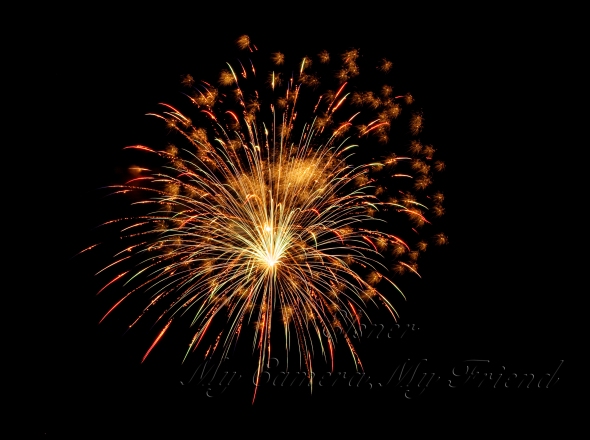 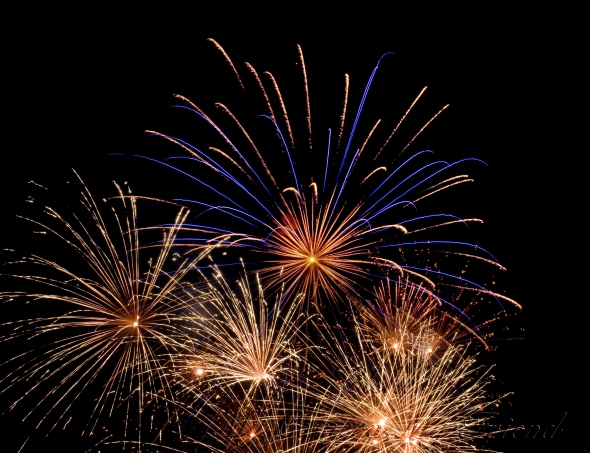 I’m saying goodbye to real fireworks untill next year, but for now I have my unique impressions to enjoy. What do you see when you look at fireworks?

Next Week: Old Playground Equipment  OR Adventures in Stock Photography Part I

I had a brief abstract look at some old playground equipment today, so that might inspire my next post. Otherwise, I may do an informative post on my experience with stock photography so far. I don’t have much information yet, and I’ve not made any money to date, but I can at least share my story and some things I wish I had known from the start (about 3-4 weeks ago?).