I just barely squished a trip to the fireworks into my 4th of July weekend. Since it was quite possible that my schedule for the next month or more would be tighter than usual, I decided to wait and post them as a regular post rather than a special 4th of July edition that weekend.

When it comes to photographing fireworks, just like many things in life, there is more than one school of thought. The way I originally learned involves very long shutter speeds where the light is entirely in trails. This allows me to have all the colors produced and include several bursts in one shot at the small town show I attend. The other method is to use a much shorter shutter speed and capture a lot of the sparkle we know fireworks for. This makes timing trickier. It also makes it more difficult to get multiple blasts in frame at smaller shows that are more likely to send one up at a time. Personally, I also tend to capture more smoke when I have shorter shots with a higher ISO. But sparkle is part of the fireworks, so this year, I experimented with getting a few of the blasts cut short a bit so I’d have some more.

Next Time: Change and Archive

Well, it’s happening. I’m going to be rather occupied with other matters for the next month. A necessary pain to accomplish a much desired end. I will probably post some archive material that I’ve shot in the past few years and never posted. Who knows, I may even go back to college stuff. Anyway, squirrels will most likely figure in the mix somewhere. Maybe I’ll post my college photo contest finalist shot too.

A Companion in Adventure

I said I was going to photograph the lovely old Polaroid folding camera. Despite my best intentions and the best intentions of my father, neither of us could find it. However, I did find the ancient Kodak Medalist II. Although it’s not as old as some of the other cameras in my father’s collection, it is by far the most worn and well-traveled of them all. My father acquired it while cleaning out a photofinishing plant in Wisconsin after the place went out of business. The Medalist’s owner had died by then. Reportedly, he was world traveler, and this camera was his companion on many adventures.

The Medalist II was manufactured in the late 1940s. It was a fine camera in its time with rangefinder and other focusing helps. Like many items from that era, it was built like a tank. This top view shows just how wide it is. 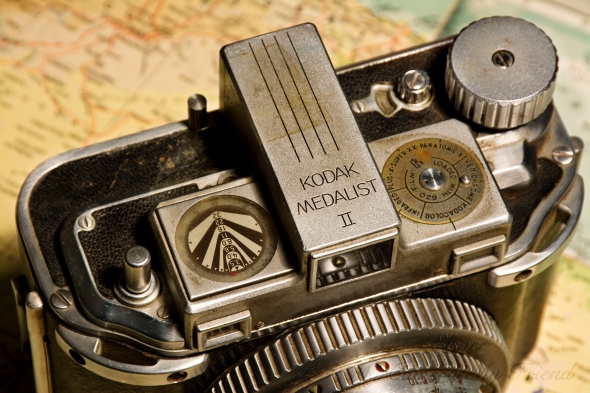 The focusing mechanism is also quite rigid and sturdy. In the camera’s present state of disrepair, it is difficult to turn.

You’ve probably noticed I’ve made no attempts to clean or retouch this relic. My father decided years ago that it should stay as he found it: someone’s old companion in adventure bearing the marks and dirt of its life and adventures. Although the former owner had it repaired on several occasions, it would take a lot to get this one back in shooting order even if we were to try. I’d estimate the last repair was about a decade before my father acquired the camera.

This Medalist II belongs to the past. However, they are such fine cameras that some people are still fixing them up and shooting with them. Here’s one man’s story of getting his Medalist II in working order: http://blog.timesunion.com/chuckmiller/welcoming-the-kodak-medalist-ii/21899/

It’s hard to believe the 4th of July is gone already. I shot the fireworks lat night, but I promised a camera post this week, and I didn’t have much time to edit today.