In a previous post, I mentioned I’d become obsessed with keys and was thinking of purchasing some old furniture or skeleton keys off eBay. It turns out I didn’t have to buy any. My mother and sister were going through some old things when they found these old furniture keys a relative had given my sister and I when we were young. Apparently, my mother decided we were too young for them and packed them away. Not anymore. Finding them made my day.

This is the smallest and most ornate of the keys. I think all the curves at the top look romantic, so I went with a love theme for this one. (As a side note, the keys is small enough and pretty enough that I’d like to buy some similar colored chain and make a necklace out of it.)

The modern squared off look on this key is in stark contrast to its well-worn and scratched finish. I went for a simple approach, but I did black and white with an old book as the background to accent the key’s age.

This is the most elegant of the three keys. 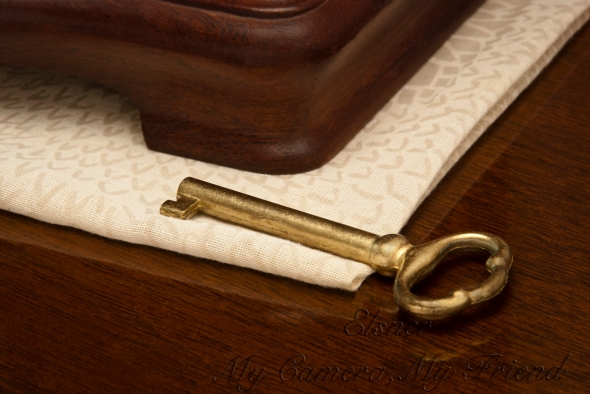 Next Time: Nature or Old Phone

Spring is slow in coming this year, but there are always some prospects out in the big wide world. If I don’t go out and find them, I promise you the phone is cool. It’s old as in has a dial, and a fancy shaped receiver.

This entry was posted on April 22, 2013 by My Camera, My Friend. It was filed under Uncategorized and was tagged with key, keys, old, photography, vintage.