I had no assigned topic this week. I more or less tried out a lens that I’ve had for around two years and never really used. Summer of 2009, I was in the South doing an academic internship on an independent film. A group of us were out at a local secondhand store when one of my friends found an old 50mm Nikon lens. It was cheap and appeared to be in good shape, so it came with me. I tried it out just enough to know that it works, but since then, it’s been confined to the depths of my camera bag (except for being featured in my post on imagination). Not this week. Little lens, your time has come.

The goal was to work with one focal length only, as I fear the zoom lens is robbing me of some sort of discipline. The real challenge was focusing a wider prime. Yes, technically the 50mm is longer than a normal lens on my DSLR, but I like the 70-100mm range, so it is wider than my comfort zone. For years, I’ve been zooming in and focusing with SLRs and using magnifiers on large format. Not to mention that it’s obvious when I’m off on the macro.  Fortunately, I met with some success this week.

First of all, I paid a visit to my old faithful test subject: the snowball bush. Admittedly a bit green right now. Really, the 50mm is a bit wide for this subject. It only focuses so close, forcing me to move back.

I moved on to some trees with interesting features, such as this “eye” of sorts, for more focusing practice. Success. Autofocus and zoom lenses haven’t completely ruined me.

Lastly, I focused on my sister’s car. It has some styling details I find attractive. Unfortunately, the paint isn’t so good, forcing me to give the car a Photoshop makeover. My sister was glad that I was painting her car, even if it was only in Photoshop. 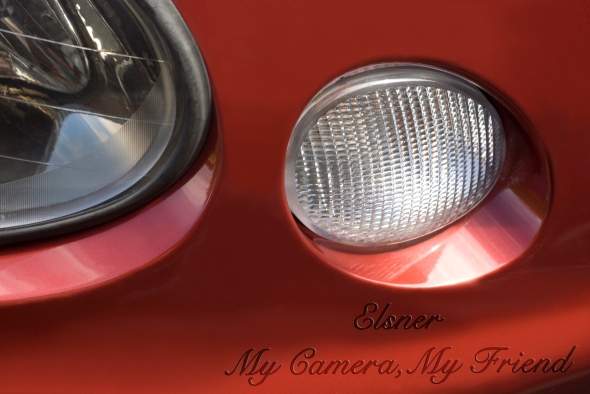 Since I could use to spend more time with this lens, I may do a part 2 to this post, but not right away.

There are so many directions I could go with this. My hope is to use timepieces and objects around them to say something else about time other than, oh, half past seven.